Chapman brings singer/songwriter experience with having charted four singles in the Top 60 Country Music Billboard Charts with his “House Like That” peaking at forty-two.  Donovan also recorded studio albums with Curb Records and Category 5 Records.

Chapman joined the United States Air Force at age 17 after graduating high school.  The family’s legacy of service runs generational.  His great grandfather served in WWI, grandfather in WWII and father served in Vietnam.  He and his younger brother served in Afghanistan/Uzbekistan in support of Operation Enduring Freedom, the Global War on Terrorism, 2002 and 2003, respectively.  Before his deployment in 2002, he served in Kuwait in 2000 in support of Operation Southern Watch.
During his time of service, he suffered spinal, nerve and TBI’s requiring multiple surgeries and reconstruction.  He was told he would never sing again.  He taught himself to play the guitar with an arm and a hand which were injured and rehabilitated by the VA Hospital.

While serving as a Security Policeman (1992-1997), Chapman cross-trained into the elite Pararescue Teams with one of the most rigorous training pipelines known to the Department of Defense.  Pararescuemen, (PJ's), are the most highly-trained Special Operations Combat Search and Rescue (CSAR) operators in all environments, i.e., desert, jungle, ocean, mountain and artic.

After close to eleven years of service Chapman was honorably discharged.  He then went on to pursue an Associate’s Degree from Tallahassee Community College and then earned his Bachelor’s Degree in Business Management from Flagler College under the GI Bill.

Chapman’s rehabilitation lasted several years and has dealt with PTSD and physical injuries.  He acknowledges The Pararescue Foundation (PJF), his PJ brothers and former Pararescueman and mentor, Scotty Gearen for their sponsorship through his rehabilitation.

Chapman says, “I learned about my path in life through the struggle and surrender that gave me the strength I never had before.  To surrender to God and ask for his true purpose for me to be fulfilled within my life was the bottom line.  I had to accept that it is okay to feel the way I did and to grow as a student for life.  I now know what our men and women go through in their darkest times, and I am proud of every step I took that led me to the truth in life, which I call the “"Secret."”  I realize that it is hard to let go of the past which attaches us to the praying victim mentality and ask God to take full control of our lives. I finally realized it had to be God's way and not my way through life. I wrote two songs on my new album "Brotherhood", to be released summer 2021, titled "Two Veterans" and "Revelation Change" while in rehab. So, I now dedicate my life to helping veterans find the peace within their lives that they deserve for their duty to our country and mankind, and service before self.  I'm on a new mission, a mission that was designed by God long ago, and that is to understand compassion at a new level, and help others. God allowed these past things within my life to happen with his hands protecting me all along. He needed me to see the truth in life and to realize why we are truly here.  I know their struggle and pain, and everyone's pain is just as real as another’s.  We're a band of brothers and sisters, a sacred circle who chose to walk the path that not many will.  I dedicate my life to them as the Pararescue brothers did to me.”

In addition, he expressed, “I feel that what we are doing at Freedom Sings
USA® is vital concerning healing from physical and mental injuries from combat.  We listen to the veterans and help them cut the link or tie to the trauma of the past and reassign a new connection of love and acceptance of their past.  Veterans need to cope with their trauma from the past without the stigma of fear and darkness. By reassigning this new connection through song, they are able to see their past in a positive way that aligns with the foundational belief of why they joined the military.  This helps veterans to disconnect from the negative darkness to light and love, and to be in the present moment.  This enables veterans to move on and to be in the "now" state of mind and to realize that their future is unwritten with unlimited potential.  The mindset changes to acceptance and new love for themselves which affects everyone and everything around them.”

Born and raised in North Louisiana and having a Hawaiian heritage, Chapman also links the spiritual connection to the land and sea and stays rooted with nature through farming, hunting, fishing, and animal rescue.


Executive Director and Co-Founder of Freedom Sings USA®, Bobbie Allison-Standefer comments, “We are very excited to add Donovan Chapman to our songwriting team. Donovan is a decorated Pararescue veteran who is also a talented singer and songwriter who is dedicated to helping veterans and bringing down the suicide rate within the Special Operations veteran community as well as among all veterans.”

Freedom Sings USA shall have no rules or policies that discriminate on the basis of race, religion, national origin,ethnicity, color, age, gender, gender identity, marital status, sexual orientation, or disability.

For more information about Freedom Sings USA®, Donovan Chapman and other singer/songwriters affiliated with the organization, visit:  www.freedomsingsusa.org. 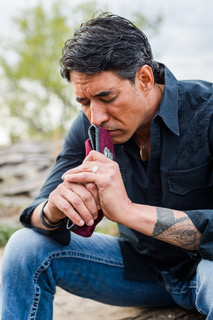 Donate Today To Support Our Veterans!